Smart assist call not getting disconnected after flow ends in kore.ai bot builder

I have flow build in Kore.ai and integrated with smart assist, but call does not end in smart assist after flow ends. It’s waiting for user input.

Are you using SmartAssist for Agent transfer, in such case the control will be back to bot once agent call is done. We will need more specifics on the flow logic and implementation.

Thank you for stopping by!!

We have flow built on kore.ai bot builder tool and we integrated that with smart assist. We want to test that flow in smart assist as we are going with voice bot. So for one of our usecase, we don’t have any agent transfer it has to end the call after the flow is completed. So the issue is after the last message received from bot builder the call is not getting ended, it trys to keep listening on user input."

Did you figure out what the issue was?

In the flow set up you have mentioned, after the automation is configured, have you set the end call node assuming you are using the latest/V2 smartasssit.

Let us know if this helps! If the issue still persists, please share the flow screenshot for analysis.

Hi @eeskildsen and @sukshettigar - We have fixed this issue in a recent SmartAssist release. Could you please retry your scenario and let us know if you are still facing this issue?

Thanks for the reply. Here’s how it’s set up…

The bot is supposed to say, “Is there anything else I can help you with?” after successfully finishing a dialog task.

The dialog task for that is called “Is there anything else.” It’s wired to the “End of Conversation” event in BotBuilder. 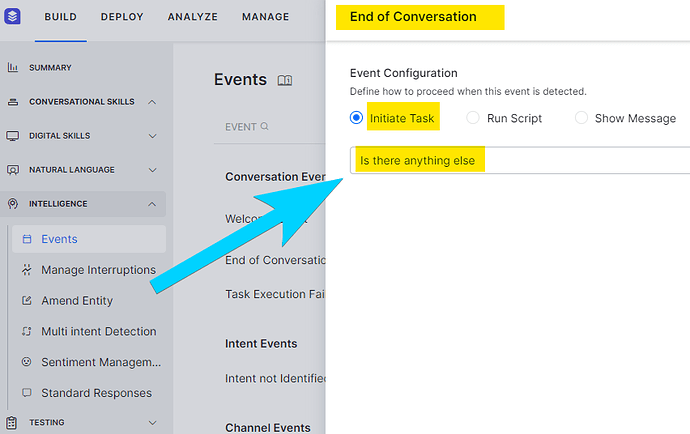 That’s the only way I could get the “End of Conversation” event to fire. If I route to an “End Flow” node instead, the bot never asks, “Is there anything else?”

I also configured the bot’s AudioCodes channel. It’s set to trigger “Is there anything else” when “End of Conversation” fires. 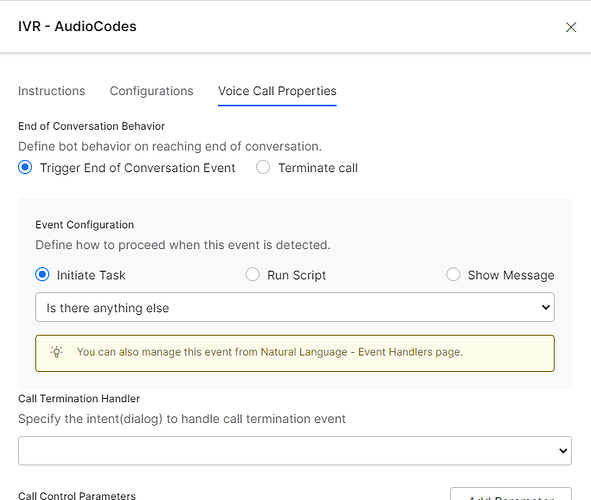 Not sure if that’s needed or not…

It’s still not working for me.

The bot stays on the line after the “End of Conversation” event. This happens when “On Success” is “Let the bot handle.” 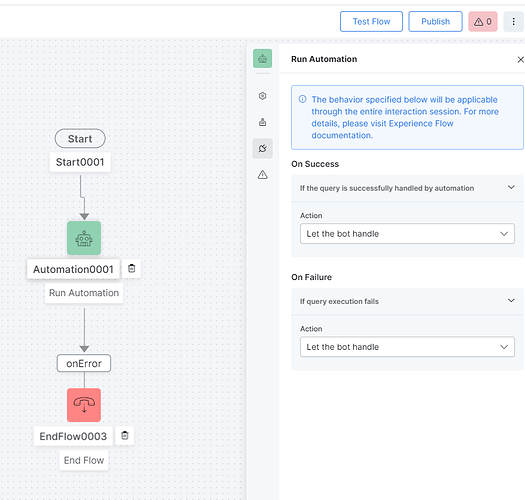 My End of Conversation task is just a message now. I simplified it for testing. The task name is TestEndOfConversation. 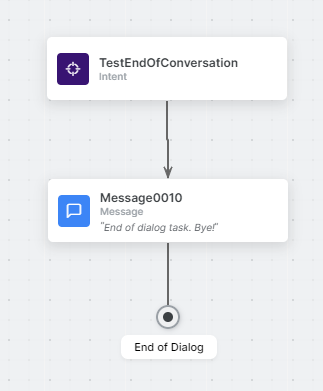 I tried a few workarounds (e.g., an AudioCodes hangup message). Nothing worked. SmartAssist would wait on the line forever after the End of Conversation event.

Finally, I disabled End of Conversation and replaced it with IVR menus. Then I changed “On Success” from “Let the bot handle” to the IVR menu node. 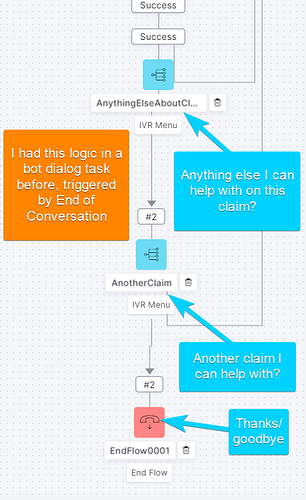 After SmartAssist calls the bot, it asks, “Is there anything else?” in an IVR menu.

Press 1 if there’s anything else I can help you with on this claim.

Press 2 if you’re finished with this claim.

It works…but now we’re back to traditional IVR.

Ultimately, I’d like to figure out how to do this conversationally, but at least this gets the bot off the ground in the meantime.