For the convenience of developers, we have a few cheat commands to facilitate testing or in some cases capture user information. Some of these commands are:

Cheat who am i:

This command is used to obtain user id for the current user. This can be used in bot-builder or channel.

Cheat who am i 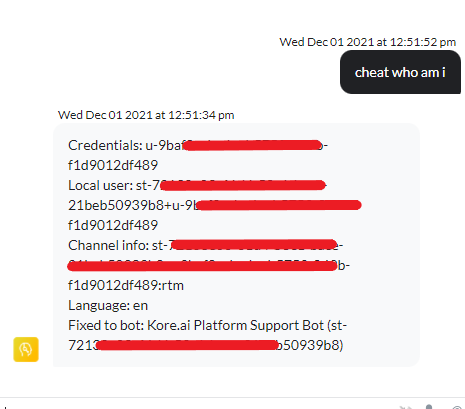 Response will have user id and bot id, language and channel information.

Cheat developer off : enforces the communication via published copy of the bot. So the testing can give developer an idea on how bot behaves for the end user.

Cheat developer on : Reverts the control to the in-development copy. This mode is the default for developers.

For multilingual bots language detection will depend on the relevant settings. In case a developer wants to test the bot for a different language, it can be done using this cheat command.

(language name or code can be used)

Note that for a published bot, cheat commands will only work in case of Enterprise bot(Named User).

Useful to validate the ML engine scoring for a particular utterance. 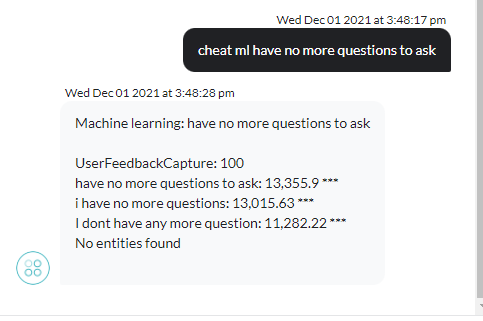 As seen above, “UserFeedbackCapture” is the task that has been identified with 100 score. Individual scores for the utterance are also provided.

This command is useful if we want to validate the KG engine scoring for FAQ detection. 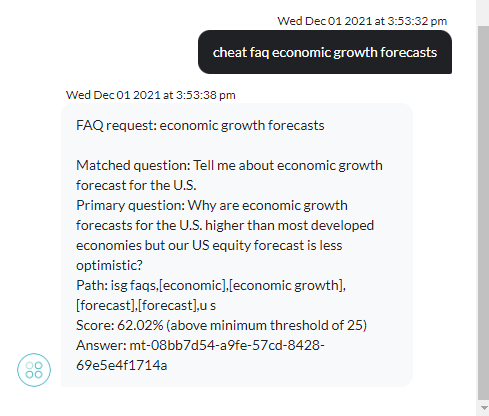 As seen above, this command provides the matched question, details of question and path, scoring.